The Most Beautiful Lakes In Arizona

Arizona is located in the southwestern region of the United States and has become a haven for nature lovers featuring absolutely stunning rivers, deserts, flatlands and mountains. The state offers an extreme diversity in terrain that both beautiful scenery.

Theodore Roosevelt Lake was named after the former president and is an extremely large reservoir located in the central part of Arizona. This is one of Arizona’s largest lakes featuring a surface area of over 8600 hectares and a marvelous 205 km shoreline.

The late features a number of various species of fish and is perfect for fishing. Drop your line in for a chance at grabbing a sunfish, crappie, carp, channel catfish or smallmouth bass. The neotropical migrant bird the willow flycatcher also calls Theodore Roosevelt Lake home.

The lake is surrounded by the Arizona National Scenic Trail which makes it a spectacular sight. The lake also features a marina with boat rentals and camping facilities. Located in the Phoenix area, this particular lake is an absolute boaters dream was a little under 12 mi.² of surface and a shoreline that goes on for 180 km.

The area is well known as a major recreational center due to its great fishing and boating. Just a few of the species of fish that can be found in the lake include tilapia, sunfish, crappie and white bass.

The lake features absolutely magnificent scenery with the surrounding area perfect for an afternoon picnic, mountain biking, hiking or a weekend of camping. Two of the marinas on the lake shoreline offers storage, boat rentals as well as mooring and have a convenient shop and restaurant. 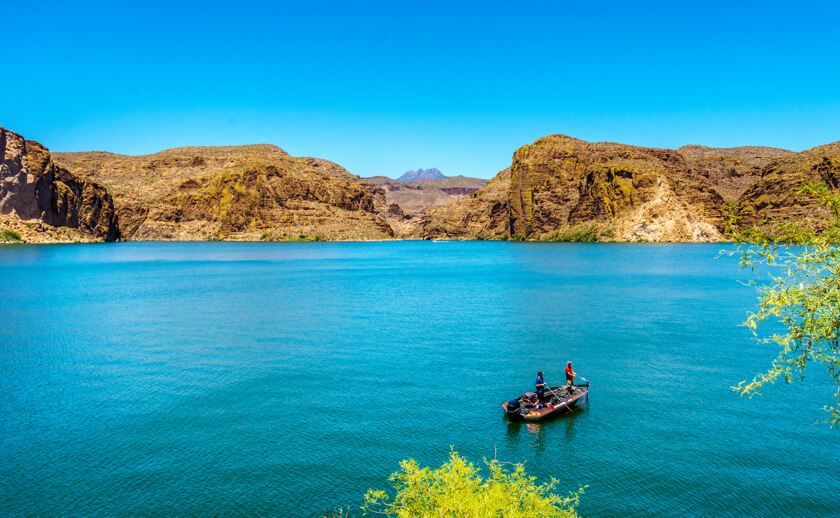 Canyon Lake was created in 1925 when the Salt River was dammed up. With a size of only 380 hectare, this is one of the smallest lakes that sits along the river and Superstition Mountains.

The lake is only 82 km east of the city of Phoenix and just a short 24 km from the Apache Trail. This is a highly popular spot for camping, hiking, boating and other recreational activities.

Canyon fission is a popular area for game fishing with several species including largemouth bass, carp, rainbow trout, yellow bath, and walleye. Surrounded by Superstition Wilderness Area, this is in absolutely breathtaking area in Arizona. 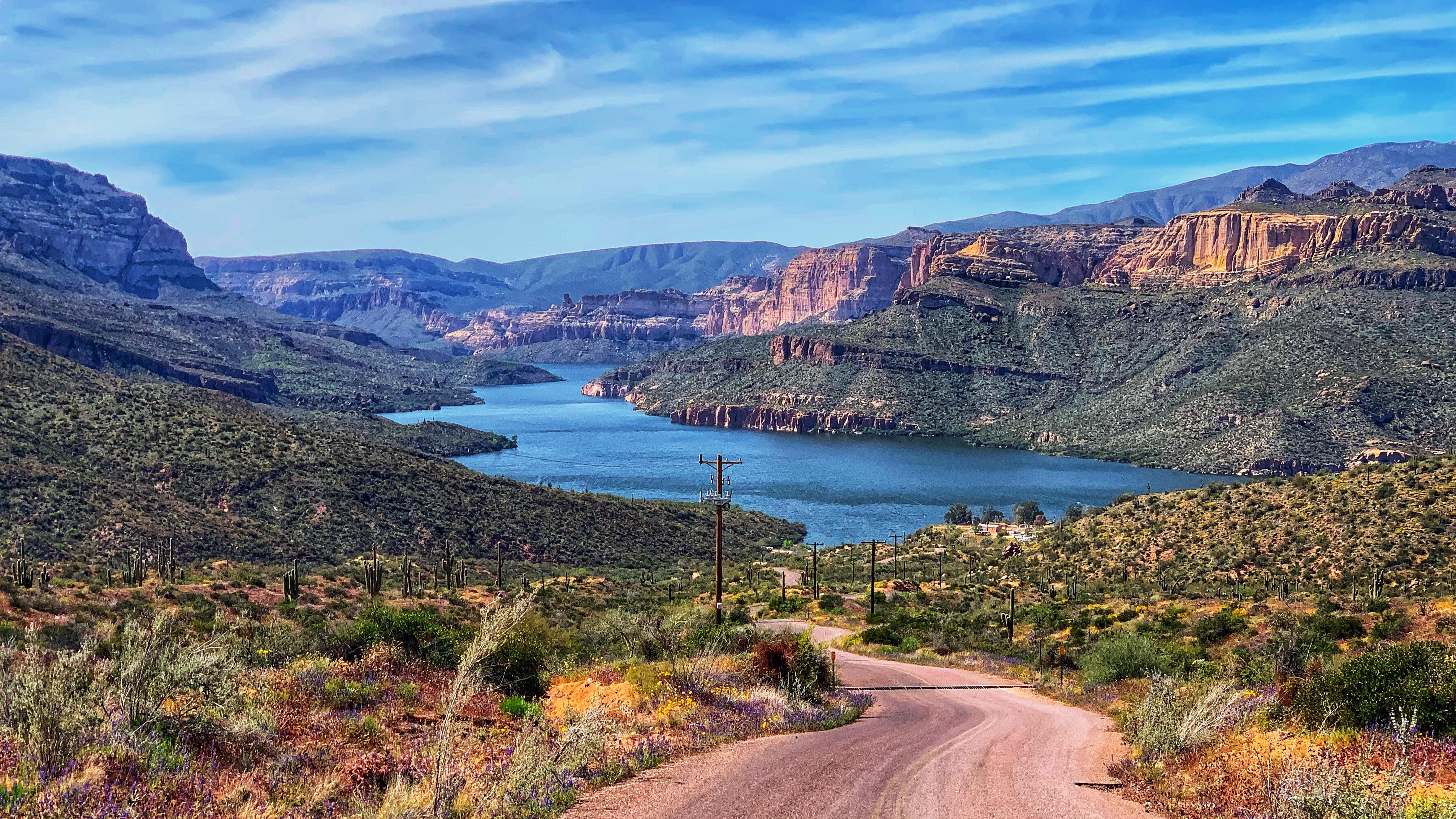 Located on hundred and 4 km northeast of Phoenix, Apache Lake is one of the four main reservoirs found along the Salt River. Additionally, the lake it’s next to the Apache Trail in Tonto National Forest

Apache Lake is another area quite popular for recreational activities, with many of those being located at the Lakes Marina. However, fishing in the lake is one of the most popular activities with a wide number of crappy, largemouth bass, walleye, channel catfish and sunfish waiting to be caught.

Located directly on the shoreline of the lake is an RV park, three motels as well as a restaurant. While the Apache trail is the main attraction, there are a number of other spectacular trails that surround the lake.

Another one of the reservoirs that sit along the Salt River is Saguaro Lake, which can be found in Tonto National Forest. The lake sits in an elevation of 459 m above sea level and is surrounded by truly donning natural landscapes.

Saguaro Lake offers its visitors incredible fishing with channel catfish, crappie, yellow bass, largemouth bass, and rainbow trout all calling this lake their home. The lake is home to jet ski in, sailing, water skiing as well as kayaking for fun activities.

There is a marina that can be found on the lakes 35 km of shoreline which offers ramps, restrooms, picnic tables and a restaurant. Butcher Jones Beach is the premier destination for an afternoon picnic and swim.

This is one of the smaller lakes that is located in northern Arizona and is just about 48 km from Payson city. While Woods Canyon Lake is rather small it is extremely the, average in 7.6 m in depth.

This lake was created with recreation in mind, with fishing being one of the most popular activities here. Camping is extremely popular as well as biking and hiking around the area.

Bartlett Lake is known throughout Arizona as the best reservoir for sportfishing. There are a number of species that inhabit the lake including largemouth bass, smallmouth bass, crappie, sunfish, flathead catfish and crayfish.

The lake is over 815 hectares, making it perfect for sailing, waterskiing and swimming, the shoreline is perfect or an afternoon barbecue and picnic. There are several areas that are perfect for camping, however, there are no rooms available to rent at the marina.

Bartlett lake was formed when the Verde River was dammed in 1939. The lake is situated about 77 km from Phoenix directly within the Tonto National Forest. The lake is truly picturesque surrounded by rolling hills and cactus.

Just as the name would suggest, Tempe Town Lake is located within the city of Tempe. This particular lake was created in 1997 and fully open to the public in 1999.

The lake is home to Tempe Beach Park which has convenient paths for jogging, in-line skating and cycling. Fishing and boating are enjoyed throughout the lake, with the rainbow trout stopped every single year. There are also several regattas that occur throughout the year.

The Lake southern shore host a massive marketplace that includes restaurants, a mall, fire pits, pedestrian walkways and a nice concert venue. Surrounding the lake are condominiums and a number of office towers.

Found within the confines of Prescott National Forest, Lynx Lake is a gorgeous lake nestled between greenery and trees. The lake is situated almost 1700 m above sea level and is located about 8 km east of Prescott.

Links Lake is one of the most popular recreational areas in central Arizona, featuring a wide array of activities including camping, hiking, fishing and boating. The area is host to a wide number of animals including bald eagles, deer, Osprey, geese and a number of other animals and creatures.

Almost 125,000 people will visit the lake every single year, most of those looking to avoid the hot desert heat. The lake can be easily accessed via local roads and is accessible to those who are physically challenged as well.

Alamo Lake was created in 1968 when the Alamo dam was formed for flood control purposes. Now it has become one of the most popular fishing spots and recreational areas in Arizona.

Alamo Lake Colts an incredible number of sunfish, child catfish, crappie, largemouth bass and other numerous fishes making it a prime spot for fishing tournaments In fact, everyone of the states fishing records take place at this very lake.

Throughout the park, hiking and camping is offered as well as a number of cabins were individuals seeking a little more comfort. Throughout Alamo Lake, one can enjoy biking, boating, swimming and a nice picnic. Pesticide-Free Lake Management Solutions You must have a well-prepared lake management plan for proper pond and lake restoration. If that is not your starting point, all you are doing is…

Repairing Your Concrete Pond & Water Fountain It is not always easy to keep your concrete water features in good working order. Sometimes, there are repairs that need to be…